On Oct 26, at around 0300 hrs, reports indicate that approximately 80 members of a Puntland pro-Islamic State (ISIL) group entered Qandala Town, Bari region. Sources reported the militants were armed with PKMs, AK47 rifles, RPGs, with indications some militants arrived in the area in four Technicals. When confronted by elders in the city who requested the militants depart, the group reportedly stated that it was in Qandala to stay and govern the area under Sharia Law. The group’s leader, Sheikh Abdulkadir Mumin, reportedly gave a speech in the mosque and a flag was hoisted above the old Italian colonial administration building. A number of civilians fled the area by sea. Al Furat media released a short 01:09m video purporting to show the militants enter Qandala on foot.[i] Later on Oct 26, ISIL propaganda outlet Amaq Agency reported the incident. In the evening hours of Oct 26, the group withdrew from the town and moved into the wadis and mountainous areas on the outskirts of Qandala. Since Oct 27, militants have remained in the Qandala area in de-facto control of the town. From Oct 26 evening, there have been reports of Ali Saleban clan militia undertaking vehicle ambushes and preventing access to coastal areas east of Bosaso, including Qandala. Mumin’s group is based in Bari region and swore allegiance to Islamic State in Oct 2015 after breaking away from al-Shabaab.

Also on Oct 26, at approx. 1930 hrs, a grenade attack was reported targeting Biya Kulule Police Station in Bosaso Town. Reports indicate that unknown assailants threw two grenades at the station, however one device failed to detonate. One to two inmates held at the station were injured. Amaq Agency issued a short press release, claiming ‘Islamic State fighters’ carried out the attack on Bosaso police station. 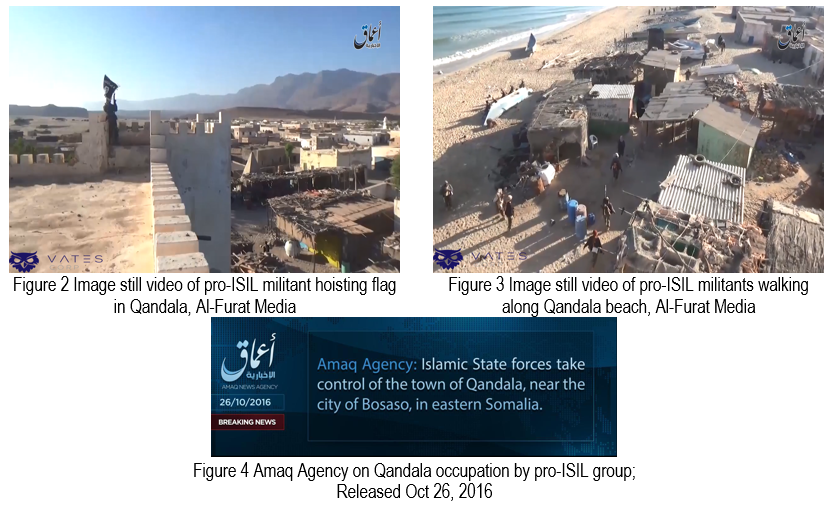 Assessment The trigger for the movement is unconfirmed, but the impact has been a major publicity coup for the group given the widespread international media attention that has eclipsed al-Shabaab’s arguably more substantial terrorist activities over the past weeks. Small numbers of pro-ISIL militants have reportedly re-entered the town since Oct 27, with the majority of the group said to be staged in mountainous areas just outside the town. Prior to this movement, the group was not known to be mobile, with unconfirmed reports indicating vehicles sighted may be linked to the arms smuggler and former pirate gang leader, Isse Yulux, who hails from the same sub-clan as Mumin (Ali Saleban). The militants may have entered the town ahead of a possible arms shipment or movement of personnel through Qandala, as this is a known smuggling route linked to Al Mukalla, Yemen. However, given the open and exposed terrain, and size of Qandala, it is highly improbable the militants will attempt to hold the city with such limited number of forces. Following the release of a propaganda video by the pro-ISIL group on Sep 16, there were indications that it was growing in strength with an increase in the number of fighters, quality of uniforms and weapons, with possible indications of external funding.[i] The video showed the presence of several foreign fighters in the group. Additionally, there are unconfirmed reports that Mumin’s faction numbers may have been recently strengthened by the defection of approximately 30 al-Shabaab members from the Golis Mountains.

There is likely correlation between the activities of Mumin’s group and dynamics within his sub-clan. Given the proximity and accessibility of Bosaso to Qandala, the grenade incident involved militants or individuals separately deployed to Bosaso, and the grenade attack was almost certainly timed to coincide with the occupation of Qandala. This was likely intended to give the appearance of an expanding ISIL group operating at multiple locations across Bari region, however the information on numbers of militants and capabilities does not support this. It is plausible that the group’s leader, Mumin, drew on his sub-clan network to undertake the grenade attack, with limited information to indicate there is an established presence of pro-ISIL fighters in Bosaso. Mumin’s pro-ISIL faction’s area of operations has been in Bari region from Iskushuban and Ufeyn and up to the outskirts of Qandala, where he has drawn membership and been afforded protection from stronghold areas of his Ali Saleban clan. Since Oct 27, Ali Saleban militia manning roving check points have intermittently prevented vehicles from accessing the coastal areas east of Bosaso on the routes to Iskushuban, including Qandala. This is a concerning development which should be considered against the backdrop of political negotiations between Puntland President Abdiweli Mohamed Ali (Gaas), and renegade militia leader and former Bari Governor, Abdisamad Galan (sub-clan Ali Saleban). Meetings between Gaas and Galan have taken place since Oct 27, which reportedly included demands by the Puntland administration for Galan and his sub-clan to remove the pro-ISIL group from Bari and prevent its spread into key towns in return for a high level political appointment. The talks coincide with the federal Lower House elections which provide opportunity for both sides to negotiate using the prospect of potentially lucrative positions inside Puntland and/or federal government structures, which will also be important to his sub-clan’s political stake and influence.

Previously Mumin’s pro-ISIL group, Yulux, and Galan’s militias have operated from bases in proximity to each other in the eastern Bari region. While the levels of support or cooperation cannot be confirmed, Galan has publicly opposed the ISIL group. However, Galan and Yulux’s militias have cooperated in the past, and reports indicate Yulux is supplying weapons to Mumin’s group. Events since Oct 27 strongly suggest an overlap and some degree of coordination between clan militia and ISIL, and that the Ali Saleban (and Galan) may be exploiting the threat of ISIL and insecurity to pressure the Puntland administration into meeting their political demands. While the coordination of activities remains unconfirmed, some in the region describe the situation as extortion. Following the meeting with President Gaas, it is possible that Galan’s militia may agree to move against Mumin’s group as part of the political deal, although it is unclear to what extent the Ali Saleban will be prepared to take direct action against Mumin; rather than merely giving the appearance of doing so. The situation is fraught with risk should Puntland acquiesce to the demands of Galan without guarantees to remove the pro-ISIL group from the region and prevent them from moving into new areas. What is clear is that Mumin’s group requires the support of the Ali Saleban to maintain and grow its position in Bari region. Furthermore, Puntland will be under pressure to act on this movement and the increasing threat from pro-ISIL militants in Bari region. The occupation of Qandala comes at a time when significant numbers of the Puntland Army are mobilised on its southern border and in conflict with Galmudug forces centred on Galkayo, Mudug region, while the greatest portion of its forces remain engaged in the Golis mountains to counter the ongoing al-Shabaab threat. As such, any Puntland response to the pro-ISIL group activities in Bari may conversely result in a de-escalation in Galkayo, supported by the recent UAE brokered peace agreement between Puntland and Galmudug. However, there is no indication yet of Puntland mobilising a large number of forces to move against the group. Puntland PMPF reportedly have a small number of forces in the area on land, and patrol boats have fired at militants in Qandala town on Oct 31 and Nov 01.

The Qandala occupation and the Bosaso grenade attack both claimed under the ISIL banner have already elicited widespread media attention with commentators speculating on the emerging ISIL threat to Somalia. Invariably, media commentary appears to be premised on the notion that Islamic State in Somalia is a monolithic entity, with Mumin’s group and claimed activities by small pro-ISIL cells in Southern Somalia as proof of the group’s area of operation across the length of Somalia.[ii] Indeed, pro-ISIL allegiances are fluid in the South and could evolve with the defection of a senior al-Shabaab commander(s), although estimated numbers of Mumin’s faction in Puntland have exceeded 200 in some media, without any indication of how they have arrived at this position. Based on our previous information and following the Sep video, we assessed the Mumin’s pro-ISIL group to comprise 50-60 militants, and with recent reports of approx. 30 al-Shabaab defectors joining the group, this appears in line with our source information of approx. 80 fighters in the Qandala area. It is important to note the underlying factors in Puntland which may be linked to recent events, and are almost certainly being exploited by this pro-ISIL faction in northern Somalia. The movement around Qandala is further confirmation of an evolving ISIL threat in Puntland which, if left unchecked, is likely to become more dangerous. End

[i] On Sep 16, Islamic State (ISIL) media wing, al-Furat Media Foundation, released a Terrorist Propaganda Video, ‘Eid on the Frontlines of Somalia’. The 17:34min video included Somali, Arabic, Kiswahili and English language speakers. There were approximately 50-60 militants filmed in an area almost certain to be north eastern Puntland. Pro-ISIL fighters from Sheikh Abdulqadir Mumin’s group were seen with weapons including AK47s, M16s, PKMs, and at least one RPG, all in good condition.

[ii] Mumin has acknowledged the plight of pro-ISIL former al-Shabaab members that have been subject to a purge in southern areas of Somalia. On Apr 15, Islamic State media wing, al-Furat Media Foundation, released a Terrorist Propaganda Video, “The Camp of Abu Noman the Martyred Commander, Soldiers of the Caliphate in Somalia”. Sheikh Mumin’s video release was dedicated to a leader of a pro-ISIL breakaway faction who was murdered by al-Shabaab militants near Sakow, Jilib in Nov 2015.

[i] Al-Furat Media Foundation has also released previous propaganda videos of Puntland ISIL group, including a 17:34min video entitled ‘Eid on the Frontlines of Somalia’ on Sep 16.