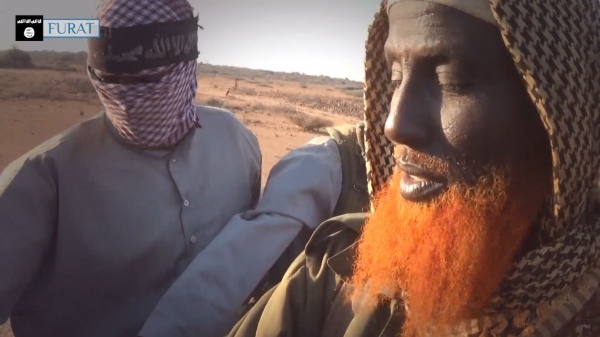 Fig. “The Camp of Abu Noman the Martyred Commander, Soldiers of the Caliphate in Somalia”, Abdulqadir Mumin’s Bayah; Release by al-Furat; Apr 15, 2016

We can form a single united body, while the enemy must split up into fractions. Hence, there will be a whole pitted against separate parts of a whole, which means that we shall be many to the enemy’s few. (Sun Tzu, The Art of War)

There have been a series of Islamic State of Iraq and the Levant (ISIL/ISIS) related events in Somalia since the beginning of April. On Apr 25, Islamic State media outlets released a message claiming ISIL aligned fighters destroyed a military vehicle belonging to the African Union on the outskirts of Mogadishu. On Apr 24, National Intelligence and Security Agency (NISA) announced the capture of Hassan Mohamed Siyad, a.k.a. Hassan Fanah, a former member of al-Shabaab and now ISIL aligned militant, along with twelve others in Mogadishu. There was also an incident prior to the arrest, where an unknown male approached a checkpoint in Bakara Market area and began running, resulting in security forces opening fire. The individual was killed, and on searching his body, a phone was found with messages of attacks that may indicate links to ISIL outside of Somalia, in Africa and the Middle East. A propaganda video was released on Apr 15 by Abdulqadir Mumin’s ISIL aligned faction in Puntland, reaffirming its loyalty to al-Baghdadi and using hadiths to justify and call for others to join Islamic State group. On Apr 07, a twitter account calling itself Jahba East Africa pledged allegiance to Islamic State in a pdf message, and denounced al-Shabaab, though its operational capacity is highly dubious.[i]

Assessment The primary near and medium term terrorist threat to Somalia, and the East Africa region, is assessed as coming from al-Qaeda aligned al-Shabaab. The appetite for ‘all things ISIS’ has grown in international mainstream media, but it is important to note that international media are reliant on Islamic State propaganda material as a primary source. They often do not have alternative or credible sources in the regions to verify the videos, images and claims by Islamic State, and typically relay Islamic State statements, which can lead to consumers assuming the reports are an accurate portrayal of what is happening.[ii] This appears to be the case with the widespread attention given to the attack claimed by Islamic State group in Mogadishu on Apr 25.[iii] It is highly probable the group has confused the messaging, that it falsely reported this incident, or that an intended attack failed in its targeting and there was a disconnect on the ground and those communicating with Amaq Agency. There have been ideologically aligned ISIL members captured or killed in Southern Somalia, but Apr 25 is the first claimed attack which may possibly be attributed to an operational ISIL cell in Somalia. At this time, Abdulqadir Mumin’s group is a confirmed, active cell in Somalia, based in northeast Puntland. This does not discount the possibility that there may be other small groups (<10 people) or the probability that pro-ISIL individuals may be in Mogadishu, and throughout Southern Somalia, with sources indicating several foreign fighters are reported to be ideologically aligned, yet remain with al-Shabaab at this time for their own safety.

There remain several key challenges and phases to the emergence of Islamic State group in Somalia such as the threat from international counter terrorism efforts, al-Shabaab, a safe haven, ideology and preaching campaigns to grow support, and access to weapons and money. When Mumin initially announced his support to ISIL in Oct 2015, al-Shabaab militants based in Galgala Mountains began fighting his small unit and forced him to flee. Mumin is currently operating from the Bari region and has sought the protection of his Ali Salebaan clan. While mainstream media has attempted to portray competition for space in Somalia as somewhat of an ‘even fight’ between al-Shabaab and Islamic State, the currently known active entities in each camp number an estimated 4000-6000 al-Shabaab militants compared with approximately 35 members in Mumin’s group. Al-Shabaab command has taken decisive action by killing those that have attempted to breakaway from its al-Qaeda aligned roots to ISIL, confirming it has no intent to change its position or allow the other to co-exist. There are indications that a number of active members of al-Shabaab, especially in the foreign ranks, may ideologically sympathise with ISIL or believe a realignment could see increased funding and recruitment. However, the circumstances of the recent capture in Mogadishu of former al-Shabaab and now ISIL aligned militant, Hassan Fanah and twelve others, appears to confirm the threat posed by al-Shabaab and counter terrorism efforts against ISIL supporters.[iv]

While Mumin’s faction is small, his video release provides evidence of his intent to unite and grow an Islamic State movement in Somalia. Mumin’s latest release was dedicated to a leader of a pro-ISIL breakaway faction who was murdered by al-Shabaab militants near Sakow, Jilib in Nov 2015. This gesture may bolster pro-ISIL members, but with al-Shabaab’s hardline stance and the recent successes of allied forces’ targeted operations, their most viable opportunity appears to be through defectors moving to the north, rather than attempting to establish and sustain themselves in Southern Somalia. Given the current loyalties of al-Shabaab leadership, there appears little prospect of a change by its leaders to switch allegiance in the near term. However, a major strike on top level leaders, combined with further successes of allied forces and state building, could shift the balance.

At this stage, Mumin appears to be trying to spread ISIL ideology and build its numbers. It is anticipated that, in time, the group will seek to undertake operations and attacks, which will require resources. Mumin’s allegiance, as well as his current base of operations in Puntland, may allow access to additional weapons and resources through supply routes via Yemen and the Gulf of Aden through known arms smugglers that operate along the Puntland Coast, including Isse Yulux who also hails from the Ali Salebaan clan. While Somalia would be an important acquisition for Islamic State to expand its regions (Wilayats), the command has yet to formally acknowledge Mumin’s bayah and it is unclear how much finances it has available for affiliates with the pressure the group is facing in Syria and Iraq.[v] This external pressure is also affecting foreign fighters travelling to Iraq and Syria with recent U.S. DOD estimates of drops by as much as 75% in the last year,[vi] which may see renewed focus and travel to Somalia by international jihadis. Regardless of external support, Mumin will be aware that in order to survive, he will need to fundraise and build his faction locally, as well as to raise its profile as part of the ISIL map. It is plausible to consider that the group may look to piracy or kidnap for ransom to sustain and grow the movement, which poses a particular threat to Bari region, including Bosaso, and a wider threat to internationals in Puntland.

Given the challenges to Mumin and other pro-ISIL elements, Islamic State in Somalia is not yet in a position to be considered a viable and operational Violent Extremist Organisation (VEO). A more accurate description of the current ISIL situation in Somalia is assessed as disparate individuals and small cells who may be ideologically aligned, and operating independently or in small groups, and in the early phases of attempting to build a VEO. Some of these ideologically aligned individuals and cells may be capable of executing low level attacks in Somalia. However, their near term success should not be measured by the strength of a cell, name of a senior al-Shabaab defector, or successful attack, but rather in their ability to evade capture by security forces or conflict with al-Shabaab as the network grows. Furthermore, and with many VEOs and insurgencies, the groups’ success is often a result of the weaknesses of the nation state and security forces, to which the insurgents are able to use to their tactical advantage. For this reason the greater war on al-Shabaab and rebuilding of the Somalia state and security apparatus is already impacting these pro-ISIL individuals and cells in their ability to operate and grow into viable networks. Nevertheless, the succession of ISIL related incidents in recent days indicates that Islamic State’s direct appeals to al-Shabaab and Somalis since Oct 2015 may be gaining some traction. These individuals and cells may inspire low-level attacks in Somalia, and highlights that fractures within al-Shabaab remain. This emphasises the importance of engaging counter terrorism efforts to degrade and destroy Mumin’s cell in Puntland. If left untouched, these fractures could also be further impacted by any successes of ISIL affiliated groups, or international media coverage that any ISIL claim or incident is likely to bring to Somalia. End

[i] Jahba East Africa ‘Our Bay’ah to The Shakyh Abu Bakr Al-Baghdadi Al-Hussayni Al-Qurayshi’ Jahba East Africa Apr 07, 2016. A PDF statement purported to be authored by ‘Jahba East Africa’, appeared on a Twitter account.  The statement offers allegiance to Islamic State Khalifa, al-Baghdadi. The statement claims that many in the ‘newly created’ Jahba East Africa were fighting in Somalia and that some returned home to open up new fronts. There is no evidence that Jahba is an operational violent extremist organisation (VEO), nor that it is based in Somalia, nor if was part of al-Shabaab, nor if it exists beyond a Twitter account. Note that the name of the group was initially spelled Jahba, including in the Apr 07 statement but later changed to Jabha.

[ii] Williams, L (2016) ‘Islamic State Propaganda and the mainstream media’ (Sydney: Lowy Institute): Pg 6: Media outlets have become dependent on videos and images produced and released by Islamic State. Consequently, Islamic State has been able to exert significant control over the way in which it is depicted. There is almost no way to verify the information first-hand, meaning reports about Islamic State often rely on material released by the group itself. (http://www.lowyinstitute.org/files/islamic-state-propaganda-western-media_0.pdf Last Accessed Apr 27, 2016)

[iii] AMISOM statement said the claim was false, but reported an IED exploded in Arbiska after their convoy passed. Arbiska is approx. 10.5km away from the Tredice KM13 area. Sources indicate that following the ISIL statement, AMISOM visited the Tredice area and inspected the route at least three times over the course of the afternoon, and were repeatedly told by Somali commanders that no IED explosions had occurred in the area.

[iv] Some reports claimed that the group had travelled to Mogadishu from Lower and Middle Juba areas, in order to hide or seek protection from al-Shabaab militants, said to be pursuing them for their defection to ISIL.

[vi] Strobel, W. & P. Stewart, ‘U.S. military softens claims on drop in Islamic State's foreign fighters’ Reuters Apr 28, 2016: U.S. DOD estimates the number of foreign fighters travelling to Iraq and Syria to join ISIL is down from 1,500 to 200 per month in the past one year.